From rain to nordic light – Iceland made us wet but brighter!

The Nordic World Heritage VR-Network gathered again for the third time. Þingvellir in Iceland hosted the meeting. And may I say – in an brilliant way. As did Kvarken and Jelling before them. 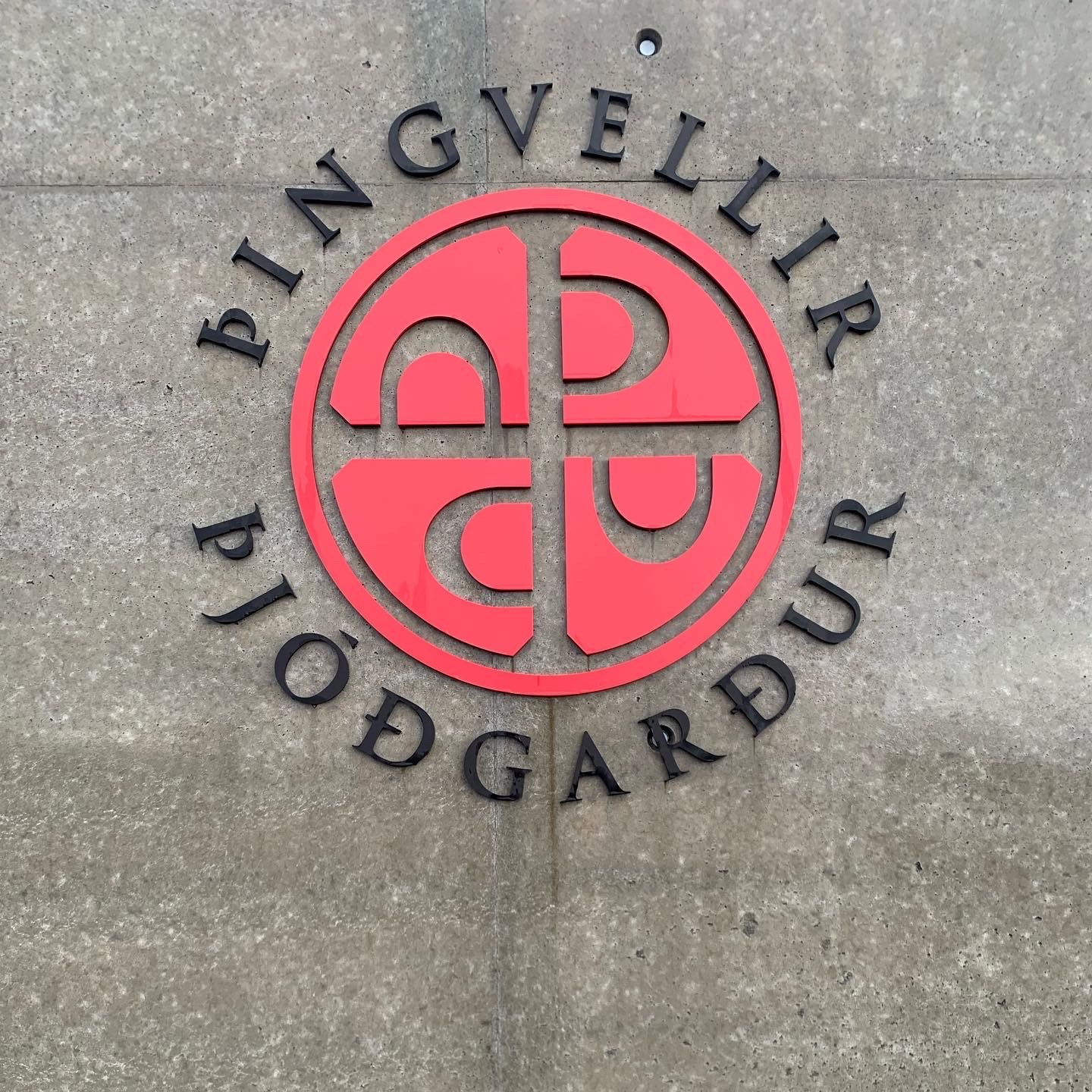 Thingvellir is one of Icelands three World Heritage sites. The visitor center is situated in the site and was the place to be under our conference days. Network members from our five World Heritage

sites; Decorated Farmhouses of Hälsingland (Sweden), Röros Mining Town and the Circumference (Norway), Kvarken Archipelago (Finland), Kongernes Jelling (Denmark) and the hosting Þingvellir (Iceland) started up by bus on an extremely rainy day in Reykjavik. Þingvellir is about 45 minutes drive from Reykjavik. After a warm welcome from Torfi Jonsson and Einar Saemundsen all the teams had a short description of ”top-of-minds” and what has been happened since the meet up in Kvarken.

Happily everything is moving forward in different speed. There was a discussion about a need of a platform and a “place” to discuss ways and costs of things. VR/AR/XR are different in so many levels and the costs varies from site to site. It would though be great to have ways to share both ideas and possible costs.

We got to meet the Danish member Adam Bak, who unfortunately was back home with covid, in a really cool 360 way from Jelling. From there the discussion drifted to ways to introduce other Nordic Unesco sites to our places. This might be a method to do so.

The exhibition at Þingvellir was a great experience to visit. Such great narrative. It really showed the World Heritage site from a technical view and it made the site so much more understandable. The exhibition was created in close cooperation with the company Gagarin in Reykjavik. A company that we had the opportunity to visit under the days to come. But to really understand the magnificence of Thingvellir; you have to explore the place and the nature.

Although the rain was pouring from the sky, east and left, the network members got a great guided tour by Torfi Jonsson. The historic place, an open-air assembly,  was established in 930 and continued to meet until 1798. Over two weeks a year, the assembly set laws and settled disputes. But how can we imagine that, when time has fled and all you can see is the beautiful landscape? The answer is; by your phone. This ”instrument” that everyone carries with them is an extraordinary tool to ”see” the chiefs from 30 tribes in place. So, even though the landscape is as living as the nature can be, the technique made it come even more alive. Back inside and dried up we discovered an introduction from Skúli Björn Gunnarsson in Skriduklaustur, skuli@skriduklaustur.is

Skuli told the common truth that different kind of projects can drive development forward. The teams got lots of ideas on how to do things on budgets and with limited knowledge - a win win.

After Skúli, Steinunn Anna from Locatify held a presentation. Her company locatify.com  has developed tools for both indoor and outdoor guide/exhibition. The presentation gave everyone an idea of that it can be easier than you think to create games and plays via app tools.

Imagine you could transfer yourself to a battle in Iceland in the year of 1238. The Battle of Örlygsstad was one of Iceland biggest battles, fought at Örlygsstad in 1238. Three of the most powerful families met in a battle to get the power of Iceland. About 60 men fell out of the nearly 3000 who took part.

The company Sýndarveruleiki invited the themes to participate in the VR-game “The battle of Iceland“ together with Sturla and his men with the mission to fight and find the magic sword. To really feel – and not just see and participate - every game player was dressed in a special vest. Once you started to play in the battle you could actually feel when a rock hit you, which of course made the experience even more real. Sýndarveruleiki demonstrated the game and we all killed a lot of Icelanders – and vice versa... The game was awarded with a  nomination for the European award "Heritage in motion“ in 2021 and has been in pop-up versions in both museum and other historical places. 1238.is/is

So how did it go in the battle in the year of 1238? Well, Sighvat Sturlason, who was one of Iceland

most powerful chiefs – and also a poet, though very little of his poetry has been preserved - fell in the fight. He had then been inflicted with 17 wounds, which was seen as proof of great bravery.

The teams was, however, still most alive after this great experience. And for that we are very grateful! emil@newreality.is The second day we started with planning the forthcoming conferences. It was decided that the next meetup will be in Röros week 12 (20-24 march) The meetup in Sweden will be at the end of September week 39 (25-28 september) The unknown tour has not yet been decided upon where to go. But the plan is week 45 (6-9 november).

Gunnar Grímsson grimsson.gunnar@gmail.com  was the first speaker of the day. He showed us what one man, one drone and a lot of time and some tech knowledge can do as he has documented and digitalized his grandfathers art gallery and home – the Icelandic artist Benedict Gunnarsson. And it was a home filled with art of a lifetime. It was quite amazing to get the favor of stepping in to an artists house and to be able to walk around the mass of paintings spread out room after room. Gunnar’s project was to register the art collection though several pieces after that have been sold and spread out from this home to other who now have the great opportunity to enjoy the beautiful art.

After Gunnar’s presentation María Guðmundsdóttir from Parity Games,   maria@parity.is  did visit the meetup and made us dive in to the game Island of Winds. islandofwinds.com/ 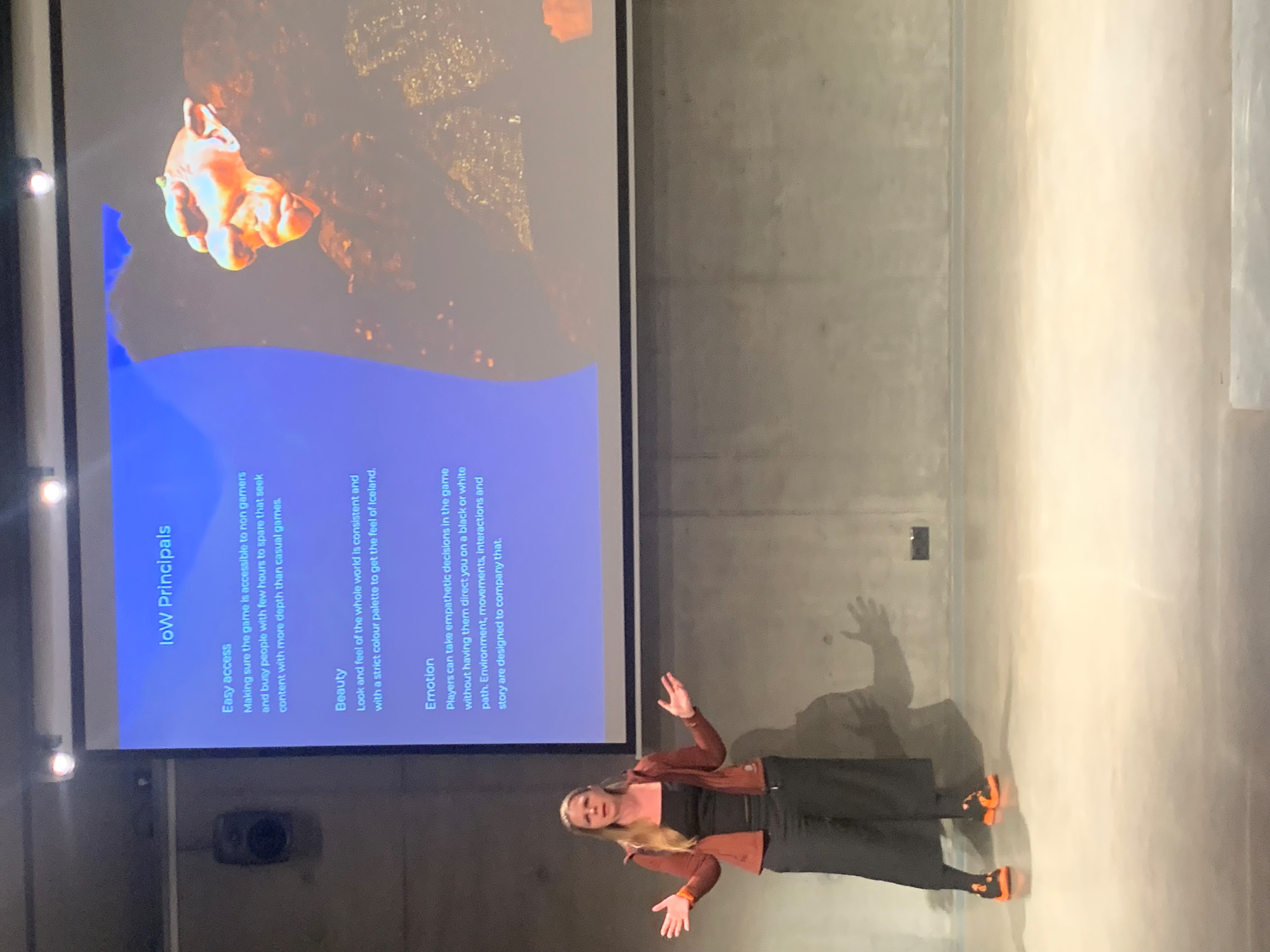 This is a game that´s draw a lot from Icelands culture and its natural environment. The colors, the incredible imaginative creatures and the fact that you can choose to take a non violent path in the game (as in opposite of The battle of Iceland) it just was fascinating to look and listen. The work has also been used to digitalize objects from local museum that otherwise has lack of time, effort and knowledge to do this.

Then Josephine Rydberg, from the Swedish team, to introduced us to Mozilla hubs and its possibility to guide people in the digital world. How do we behave in VR, how do we move, interact and how do we tell stories? We are all aware that the medium and the content are in a symbiotic relationship and one affects the other. But since VR is in it’s expressive infancy we are still exploring what this means. We are discovering that VR can’t simply be treated as a videogame, much as early film makers discovered that film isn’t the same as theatre on a screen. Filmic expression has its own language that we are so used to today that we take camera movements and montage edits for granted. What are the dramaturgical tools and tricks that are unique to VR? We’ll only find out if we dive in and do some experiments. In Josephine’s research project she stages some trial and error situations. What might be relevant to the Nordic Point project is guiding in VR. How do we catch people’s attention in a live situation?  How do we interact and take turns when our peripheral senses are hindered? What are the possibilities for engagement and participation for “the audience”? During our visit at Þingvellir, we had the chance to try and be in the same virtual space and try to simulate a guiding situation. When looking at the pictures that document this event you can see the participants standing far apart and looking in different directions even though their avatars are huddled together and facing each other.

This workshop was a first step. Next time we’ll gather around a 3d object, like the ones created in connection with the excavations at Skriðuklaustur. Of course we don’t have to be in the same room for this. Let´s hope we will see each other in VR before we meet up in Røros. Who’s game?

Back in the bus, the themes headed to Ljósafosstöð and enjoyed the exhibition of Iceland’s oldest hydro stations. The company Gagarín designed and installed the exhibition for the 50th anniversary. The aim was to create a highly interactive and modern visitor center where everyone could learn about the basics of the nature of electrical power, the discoveries that led to the mass production of electricity and the development of harnessing renewable energy in Iceland today. The team got the opportunity to test all the interactive tools, how to put energy to a big, interactive concrete wall which illuminates from within when force is applied to it. You could also discover the energy of the world by a tangible timeline that reviews the major milestones and discoveries in the history of electrical production. For better and for worse. It was a really good example of how the technique can be used in create a need of learning.

The last but not the least visit on this meet-up in Iceland was the visit of Gagarín. A great introduction was made by concept designer Lemke Meijer and we all got very impressed by theire competence and ideas for interpretation in general and specialty for the visitor center of Thingvellir. We had a fantastic visit to Gagarín gagarin.is  and we got to enjoy it. Introduction in function, prototypes, and the effort of teamwork.

This was the third meet-up and everybody went happily home to our different World Heritage sites, loaded with ideas, new interesting facts, inspired to take things that we learned with us home and – of course – with even more strengthen bounds between the sites in the network. 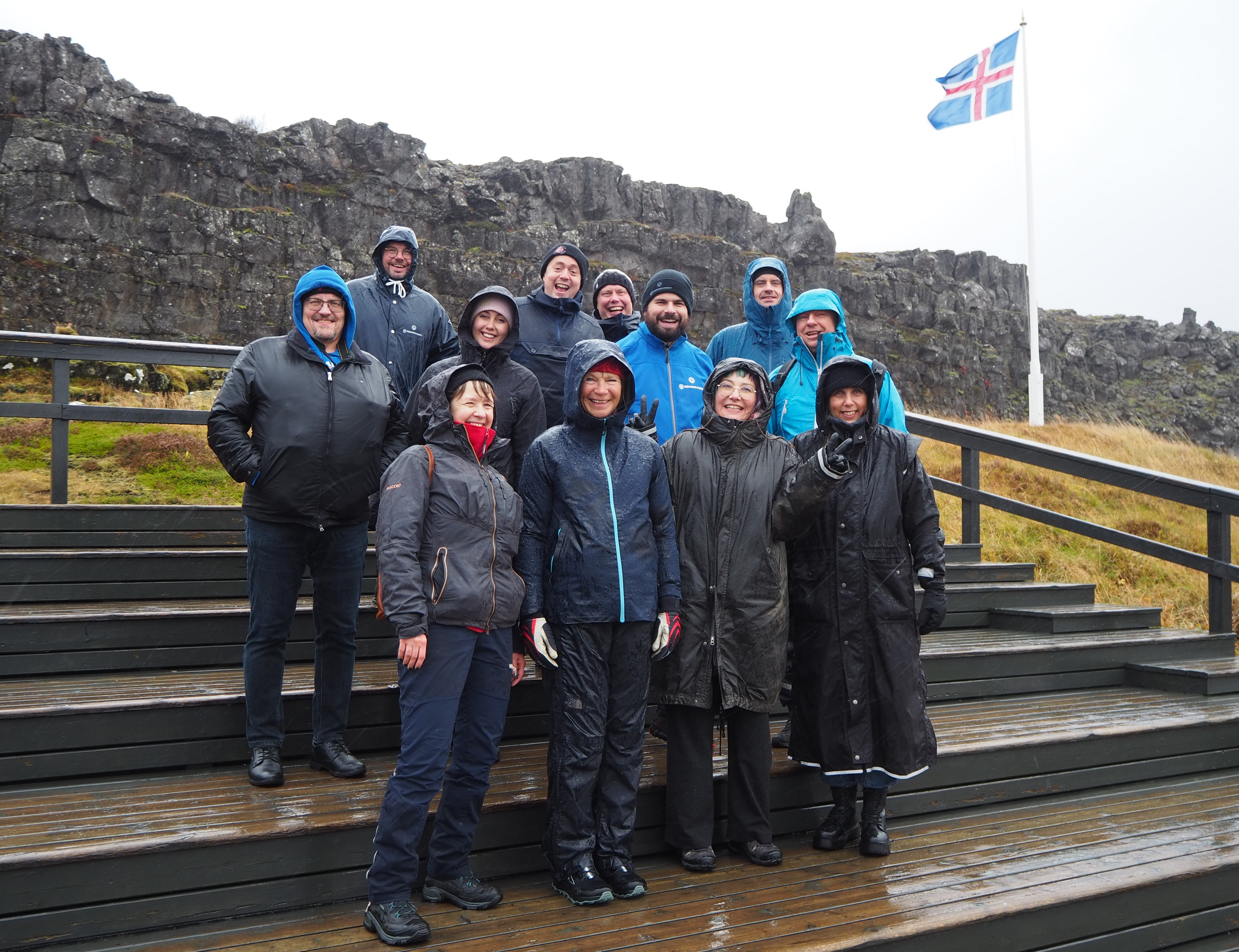